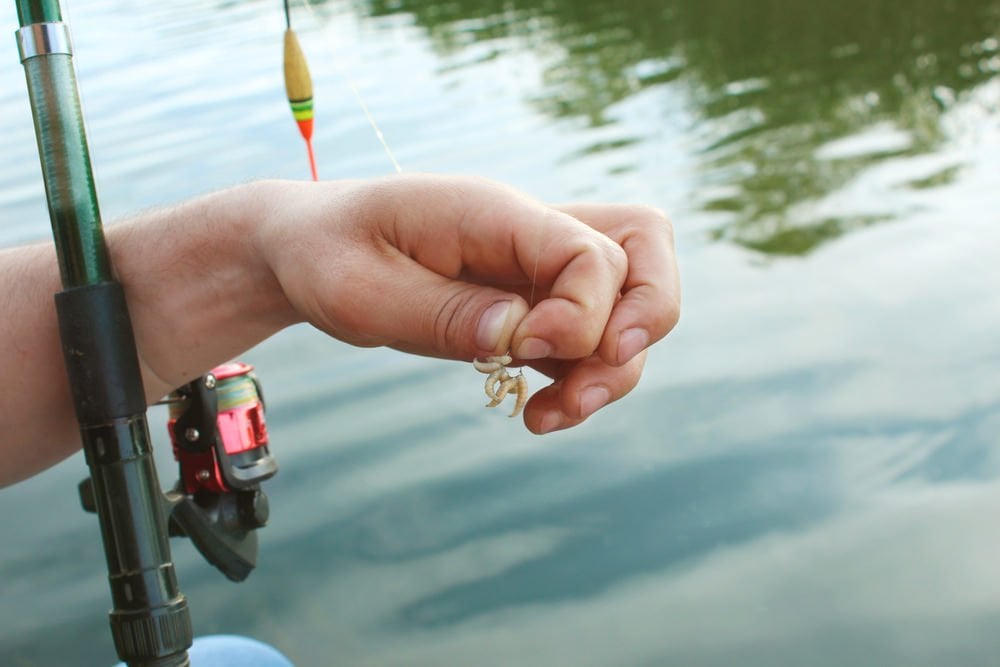 What’s up with the massive selection of fishing bait in the tackle shop? What happened to the simple refrigerator that had worms and minnows? Now you have to sort through approximately 3,000 types of fishing bait just to find that one jar of power bait you’ve been using since you were 15. Where did all these other options come from? Power bait and worms always seem to do a fine job, so why have so many options? It seems unnecessary, doesn’t it?

That generally depends on what kind of fish you’re looking for, where you’re fishing, how pressured the specific water is, and how experienced you are. Let’s say you’re heading out to a lake that sees one or two anglers a month. The pressure is almost nonexistent. Planting takes place there often, though, for some reason, you seem to be one of only a handful of people that know about it. (This is a hypothetical scenario. If it actually exists, please email me the coordinates. I’ll bake you some banana bread.) The lake is full of trout that will bite on almost anything; even the shiny hook left bare after your 4-year-old missed his 4th bite in a row. Bait at this lake wouldn’t matter. Toss a worm, and you’ll catch fish.

Another scenario would be you head to the lake, wait in line for 45 minutes to launch the boat before the sun’s up, then get to your spot and break out the bait. A quick scan of the 15 boats stacked up around you shows you the tactics they’re employing, and you want to be slightly different. If you’re following me, you now understand why there are 3,000 different baits on that crazy bait aisle. What would you toss into the lake to coax a hungry, line shy trout or walleye to chase your bait instead of the buffet offered by your fellow anglers?

I’ve experienced a little of the first and a lot of the second scenario. After years of fishing in heavily pressured waters and pulling out good numbers while other anglers watch, I know it comes down to what bait you’re using and how you present that bait. I’ve brought anglers on guided trips in the past to lakes where other anglers were complaining in the bait shop about how there must not be a fish in the entire lake. When I brought my clients back in the afternoon, they all had limits. It’s about the bait and the presentation.

Let’s take a look at the different baits in that crazy bait aisle and try to make sense of what could be useful and when to use what bait type. There are several categories, and each has several species that can be targeted. Some artificial types are considered baits, like imitation leeches, worms, and other soft plastic baits. 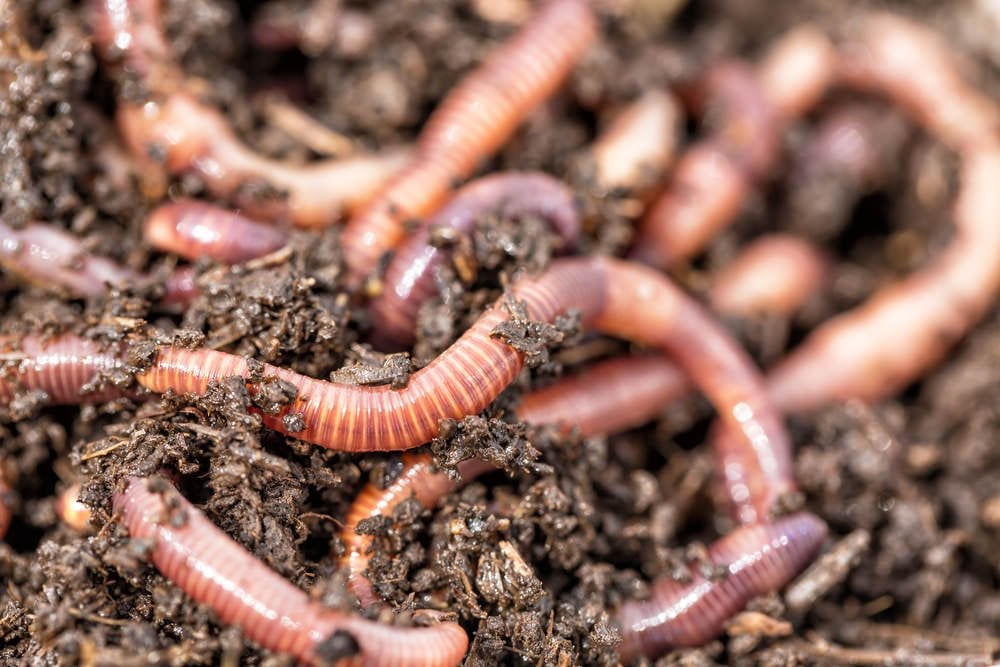 Everybody knows their way around a worm by now. A nightcrawler is a big worm that can be broken up into smaller pieces and put on the hook to catch just about anything. A red wiggler will drive trout crazy and bring them running like you just rang the dinner bell. Mealworms bring the bluegill and crappie to your bucket like nothing else. Waxworms are the perfect match for ice fishing.

How do you decide between these types? First, determine the species you’re targeting. The old ways are sometimes still the best. If you’re not sure, a nightcrawler will probably work. Take a bait hook and a few feet of leader, tie it to a barrel swivel attached to the main line. Then connect a bobber above the swivel. The worm and a bobber rig is as old as they get and works nine times out of 10. Most fish like worms and nightcrawlers will typically do the job.

Red wigglers or red worms are very active worm that brings the trout running. It hits the water and is so active that fish can sense it from a good distance, so all you need to do with it is either let it sit or do a slow retrieve, and you’ll be on the fish in no time. They are set up the same as a nightcrawler, though you don’t break them into smaller segments.

Mealworms are a great bait for going after smaller trout and panfish like bluegill and crappie. A smaller hook will hold one nicely, and with a little split shot on the line, it should stay at the right depth for you to get a nice bucket full of bluegill in no time.

Waxworms are great for ice fishing, and not just because they’re just about the only thing available that time of year. They hold up well in the near-freezing water temps, and trout and other toothy fish love them. I always bring waxworms ice fishing. Tip your ice flies and jigs with them, and you’ll improve your catch rate significantly.

Leeches are nasty little buggers that bite back. They also catch big fish and do it very well. I’ve done well with these in the past and always throw one on if I find it at the lake. When I’m at the store, I will pick up live ones and have fished some imitation leeches with moderate success.

Learn more about types of worms for fishing here. 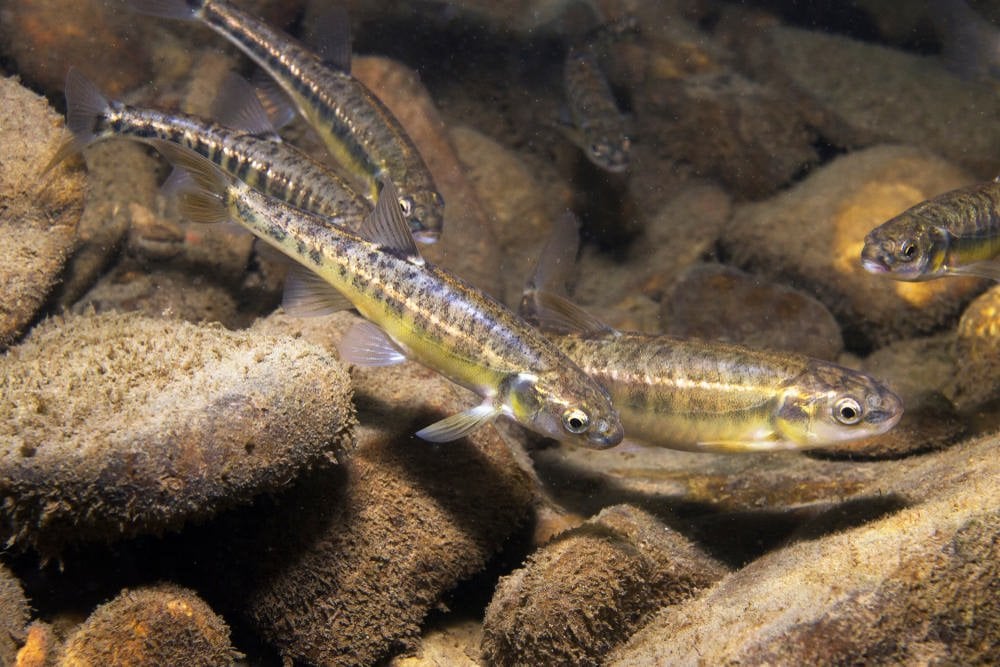 Minnows come in all sorts of shapes and sizes. If you’re picky, you can even buy a casting net and catch your own. I’m a big believer in using minnows that actually live in the lake you’re fishing, if possible and legal. If it’s not legal, I don’t recommend it. Some of my favorite lakes don’t allow that, so I buy the type that lives there and just use them instead.

Check your local regulations before using minnows. In some states, live minnows are illegal. In other states, it may depend on the lake. Things can get tricky with minnows, so be prepared and be educated before getting there.

Some of the more common minnows you’ll find are shad, red shiners, chubs, flatheads, smelt, and perch. There are so many types and subtypes you’d be surprised. Give the lake a quick read before heading out to find out the common forage fish in it and then hit the bait shop. If the bass like to feed on gizzard shad, don’t buy a bunch of emerald shiners. That won’t help your cause. Do your research and get the closest representation of the local fare. If the fish want steak, give them steak, not chicken.

Rigging minnows can be tricky. If you decide to pick them up in the freezer section of the bait shop and head to the lake without keeping them on ice, you’re going to be fishing with little fish-shaped piles of goo in about four hours. Keep that in mind. They’ll still catch fish, but when you cast, you might leave a trail of defrosted fish entrails all over your son’s shirt. (I did that to my nephew years ago. He didn’t find it nearly as funny as I did.)

I like to use a bait hook and run the hook through the mouth of the frozen minnow, then out the spine about halfway down the body. The head of the hook usually sits right at the head of the minnow, and the tip of the hook sticks out just behind the dorsal fin. I like that setup because it keeps any weeds off. 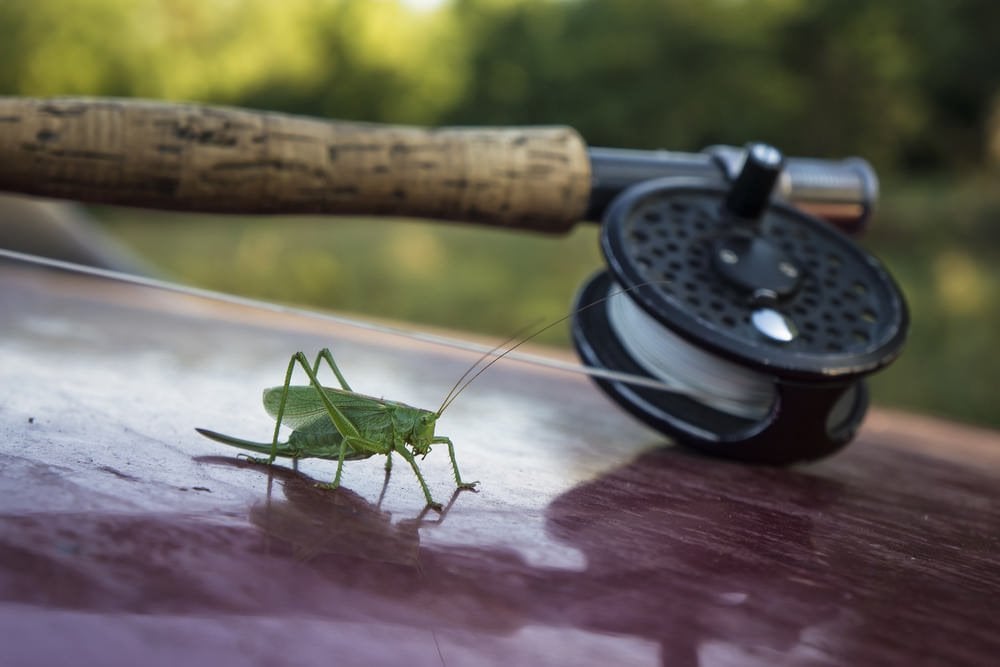 Have you ever run out of bait while bank fishing? It’s been a productive day, you’ve had several worm stealing bites, and you reach into the container to find that it’s empty? I’ve been there. Now’s when you buckle down and bring your inner explorer out. It’s time to go bug hunting.

Grasshoppers and crickets can make some of the best topwater baits out there. The way they move on the water is like a neon sign at an all-you-can-eat buffet. At most ponds and lakes from late spring through late fall, you can find these little smorgasbords hiding all around the water, just waiting to entice the fish right onto your hook. It’s worth a try, and the bonus is that if you have little children, they’ll have a field day! Literally!

See also  Does Fishing Line Expire or Lose Strength Over Time? If so, How long?

Grasshoppers are one of my favorite go-to terrestrials when I am fly fishing, so using a real one when bait fishing just makes sense to me. I’ve caught everything from big brown trout, catfish, bass, and crappie, to pickerel, pike, and even a redfish once! That one blew me away. I’ve learned to trust in the hopper. The breeze will carry those things all over the place, even into some of the most unexpected saltwater flats. 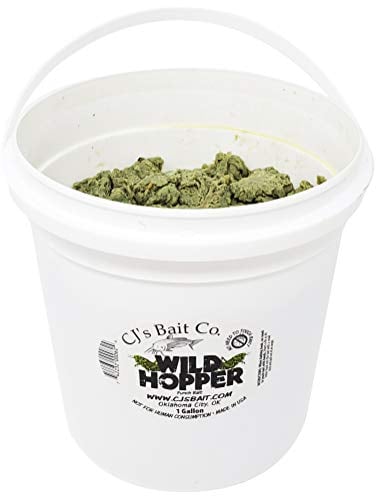 Some fish just want to eat stinky food. Catfish come to mind. There are baits solely derived for this purpose. They smell awful, but the fish love them. There are several types on the market, with several techniques on how to fish them.

I’ve never been a big catfish angler, though I do enjoy catching them from time to time. I know they like anything blood-scented and will go after chicken liver, mackerel, stinkbait power baits, and other stinky things. I’ve had friends swear by using rotten shrimp. I told them I’d never eat anything that willingly ate rotten shrimp. They left shrimp in flavored water in the sun for two days with a lid to keep all the stink in; they would drive that awful concoction to the lake and catch fish with it. No thanks. If that’s for you, that’s cool. I’ll see you after your shower. 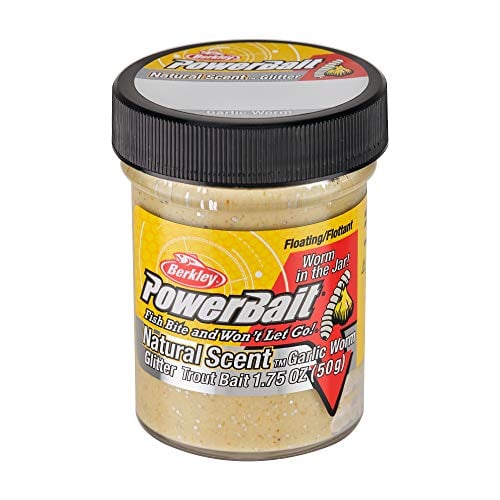 Power baits are a go-to for many trout anglers out there. These dough baits are typically brightly colored and loaded with potent scents to attract your target fish. The most common use is for trout, and I’ve caught my fair share with them.

There are far too many brands and types to list here, though some of the most popular are the garlic-scented power bait, rainbow-colored, chartreuse, and in certain areas, I’ve found the anise-scented to be very popular. I like orange colors, rainbow, and of course, the garlic scent. I also like to add scent to my lures. I use scents all the time to entice bites.

Power baits are usually applied to a treble hook. The treble hook works great to hold the dough in place for casting, and when the fish bites, the dough gives way to expose the hooks.

Overall, powerbait is an easy way to catch a lot of trout. If you’re fishing for your dinner, it’s a good route to go. They tend to swallow more hooks using this method, meaning you’re going to have to keep more fish.