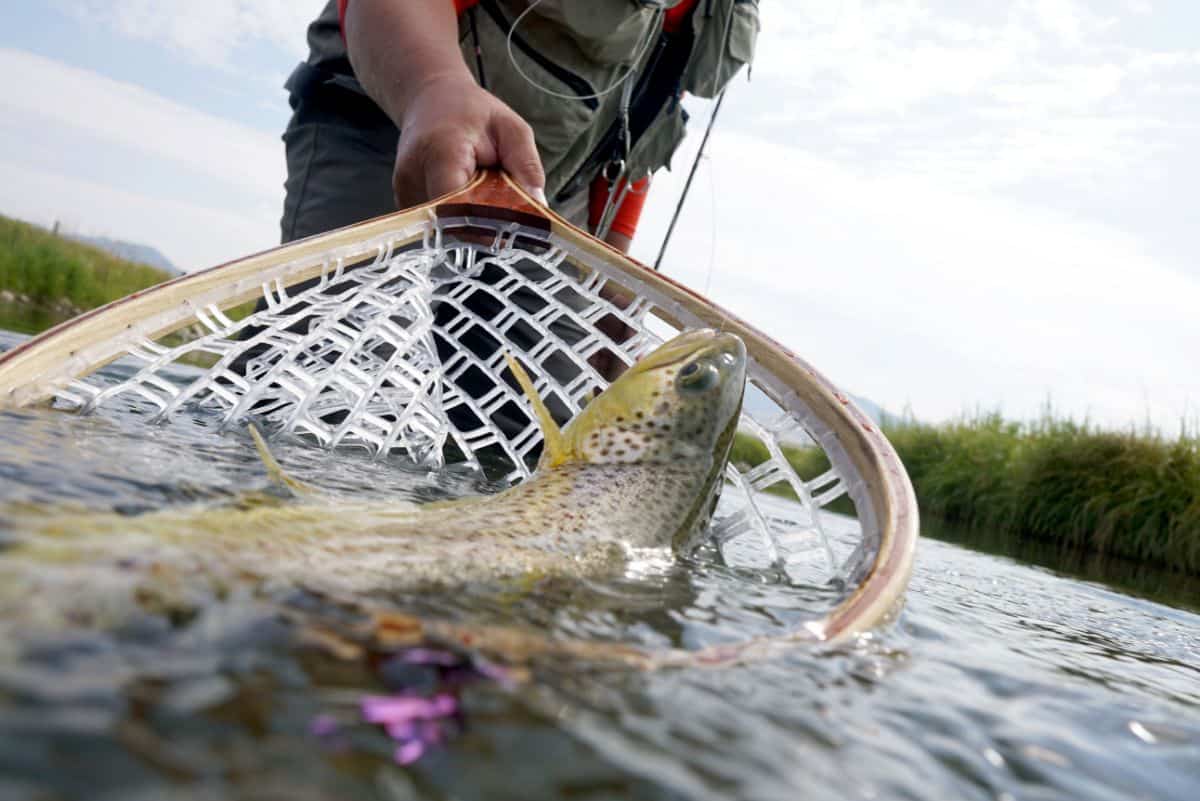 Fishing nets aren’t like they used to be. When I was a kid, I used an aluminum-handled net with nylon mesh. The aluminum wasn’t much thicker than the diet Pepsi cans my stepdad always drank.

Remember the kind with the pull-top? Probably not. Anyway, this net was great. It was about two feet across and three feet deep with a four-foot handle. In the late spring, we would go to a shallow lake where giant catfish were spawning.

The lake was full of carp as well, and at the time, the wildlife recourses wanted them all removed by any means possible. That meant little ole me with my great big net went running through the weeds chasing huge carp, trying my best to net them.

One time I was very successful. Here’s where I found out just how shoddily that net was constructed. This carp was about the size of a 1967 VW bus. I saw it coming straight at me, so I lowered the net, planted my feet, and scooped.

The fish came up out of the water, the net held, and I shouted and started running for shore. As I gained momentum, the handle began to bend, then tear. The seam where the aluminum was riveted together popped apart, the net split open, and the entire thing basically disintegrated.

I was left standing there with a fairly nasty cut on one hand. Of course, I dove straight in and grabbed the fish because it was just as befuddled as I was about the entire ordeal. We weighed it before cutting it up for bait.

I had utterly destroyed a net catching a 21-pound carp. I’d gladly do it again. That was just over 38 years ago, and I still have the scar.

Fishing nets are far more reliable and safer than they used to be. You’re not likely to get a lifelong scar by trying to net a carp in a lake these days. The nylon in your net probably won’t cause permanent damage to the fish, either.

Significant steps have been taken to improve the quality of nets so fish can be returned safely to the water without damage.

Everything from materials to designs has been rethought and updated. Nets aren’t just super thin pieces of string waiting to slice through a fish anymore. The nylon has been upgraded and, in most cases, is coated to make it much more fish-friendly. Other nets use rubber, which is far less stressful on fish.

Nets are a vital necessity in fishing. Imagine trying to land a once-in-a-lifetime catch without a net. You’ve almost got it in the boat when it makes one last-ditch attempt to get free and slips the hook. Now your once-in-a-lifetime fish is swimming away, and you’re taking it out on whatever or whoever is in the boat with you. Should have brought a net!

Let’s take a closer look at the fishing net and go over some of the more important qualities to help you make a good decision when you pick one up. You don’t want to end up with one that’ll leave a scar! 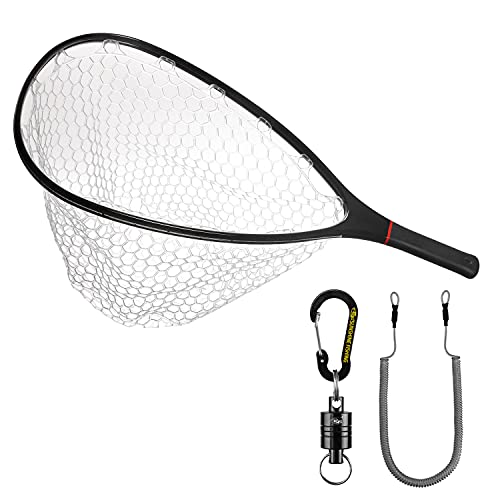 Landing nets cover a wide range of sizes and shapes. Everything from the unfortunate carp net I used as a kid to the carbon fiber landing net I use fly fishing fall under this category.

When choosing your landing net, you need to decide on a few essential factors. First, the net material is important. You can choose between rubber, coated, or non-coated nylon.

I would go with either rubber or coated nylon. There are two reasons for this. One, rubber and coated nylon are both far more friendly for releasing the fish. Non-coated nylon is abrasive and will scrape off scales and remove protective slime from fish.

Two, rubber and coated nylon don’t let your hook get tangled up as easily. Non-coated nylon is like a natural attractant to hooks. It almost calls to them. They get so caught up and tangled in nets that there have been times I’ve just cut the hook or lure off and removed it from the net later. 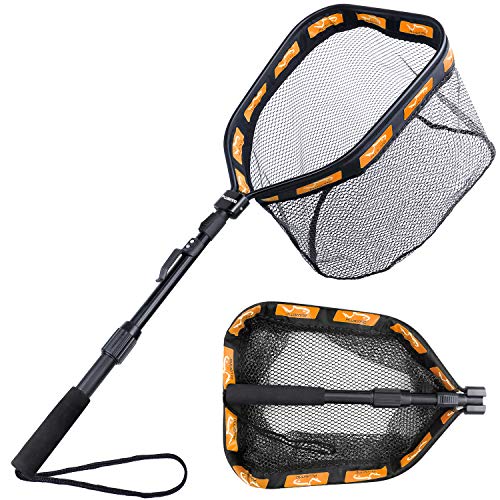 Rubber and coated nylon are typically knotless, giving hooks fewer areas to find purchase. This allows a smoother area, which lets the hooks slide off. The fish slide off too. Check that the coating also extends around the hoop. Higher-end models will include this, making the net last much longer.

Lastly, opt for a net that’s either black mesh or clear mesh. Black with a black hoop is low-vis and hard for the fish to see. Clear should be clear in the water. Clear works best in streams and rivers.

Next up is mesh size. Mesh size is important. You don’t want to land a tiny, delicate golden trout with a muskie net.

First, it would probably fall through one of the mesh holes. Second, if it didn’t fall through, it would swim into one of them when you tried to land it and get stuck. That’s no good for either of you. It would make a funny picture, though. 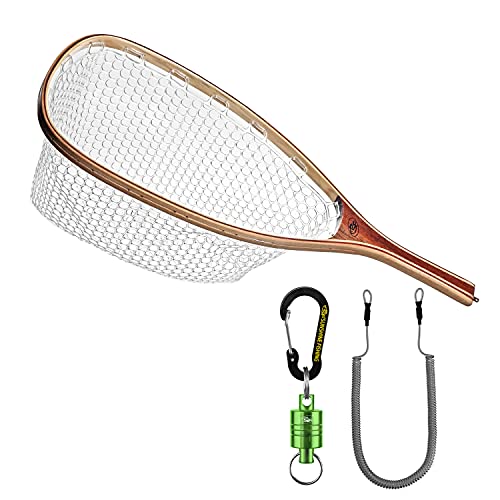 Trout and other smaller fish need a net with small mesh. If you fly fish mountain streams, use a micro-mesh net. It won’t hurt the fish, they won’t lose their slime, and it’s a beautiful net.

Bass and other midsized gamefish, along with larger trout, need a net with 1” to 1 ½” mesh holes. You can use a smaller mesh, though the issue is water resistance. The fish will feel the water resistance in the net and not want anything to do with it.

Plus, holding back that much water in a moving boat isn’t easy. Some nets compensate for that, but others don’t.

Big fish need big nets. This isn’t just about the mesh size but about the hoop shape and size. Small nets for trout are generally oval.

Telescopic nets for bass and walleye are usually square or roundish and around 20” by 24”. Big fish need something like a 30” by 40” opening. You can get your catfish into that without too much issue. A lot of saltwater fish are landed in nets of this size. Anything larger needs to be gaffed.

There are far too many giants in the ocean that won’t fit into a net. Others are getting tangled up in commercial nets all the time, so if you get the chance and come across a section of commercial fishing net, remove it if possible. There’s also a net called a muskie cradle.

Muskies and pike don’t fare well in a normal net. If you’re planning on catch and release, use a muskie cradle. 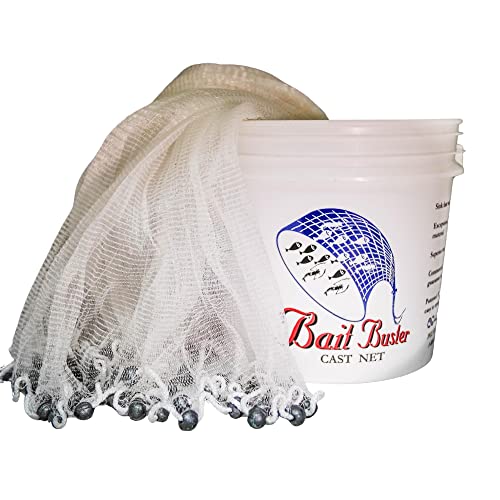 I love fishing with live minnows, but I hate having to buy them. Cast nets are the answer to my problem. When I head out onto the Gulf or out Inshore on the Atlantic, I always stop off and toss a cast net over a school of baitfish. I can usually get enough bait for the day in two or three tosses.

Things to look at when buying a cast net are first, don’t buy a cheap cast net. Period. A cheap cast net is going to teach you that you hate cast nets, and they are made by someone that truly despises you. That’s not true; it’s just that cheap cast nets aren’t always set up properly.

It’s worth the extra money to purchase one that’s been tested to ensure the weights are correctly spaced, the mesh is treated, and it opens properly.

Cast nets work by throwing the net out over the school of fish. The net opens in the air, then sinks quickly. Once it’s down a bit, you drag it in quickly with the throwline. If done right, you should have a bunch of little fish in the net. If done wrong, you might have some fish in the net, along with a big ball of nasty knots and messed-up weights. That’s why you shouldn’t buy a cheap one.

A seine net, on the other hand, is a net that you place between two poles. The top of the net is equipped with floats, and the bottom has a line of weights. The idea is to carry the poles with one or two anglers to keep the net tight and work your way forward towards the shore. Once there’s a good amount of bait in front, lift and scoop.

See also  What Can You Do with Old Fishing Rods? 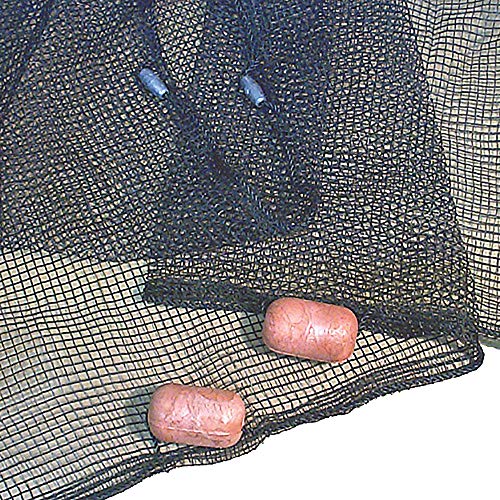 Seine nets are notorious for having faulty floats and weights. Be sure to check them before buying one.

When you’re done for the day. Clean and dry your nets. They will rot fast, and with the cost of these things, replacing them twice a year is too much. Clean and dry them.

Dip nets are for getting those minnows you just caught with your cast net. Now that they’re swimming around in your bucket or baitwell, you’ll need a net to get them. I use one every time.

Here’s why. I once threw a cast net in Hilton Head and caught some baitfish. I dumped them into my baitwell without looking too closely. Throughout the day, I kept my clients rigged up and catching fish. Everything was going swimmingly.

Around 1:00, we had been fishing for five hours or so and stopped for a few minutes to eat. My mate prepped the food, and I grabbed some drinks for the guests, then checked the water levels on everything. I pumped fresh water into the baitwell and got the bait all jazzed up again.

They were going gangbusters, so I thought, “yeah! These guys are going to get me a huge tip for sure!” After lunch, I reached in there to grab a fish and had to search around for a second.

It didn’t feel as full as it was. Then it happened. MUNCH! Something bit down on the side of my hand hard enough to take a chunk out.

Turns out I had netted a little 9” shark along with my baitfish. It ate all those fish after I added new water to the baitwell. Then it tried to eat me.

Ever since then, I have used a dip net. I should have been using one all along. My mate used to tell me I was asking for it. He got stung by a stingray once doing the same thing.

Dip nets will keep your fingers intact, they’ll keep your hands from getting cold in the fall and winter, and they’ll keep the smell of minnow off you. I love my dip net and wouldn’t trade it for anything. I had to get several stitches and have a couple of tendons repaired because I didn’t use a dip net, so I am here to tell you, use a dip net, even in freshwater.

I know there aren’t sharks in most freshwater, but who knows? Maybe there’s an alligator in there.