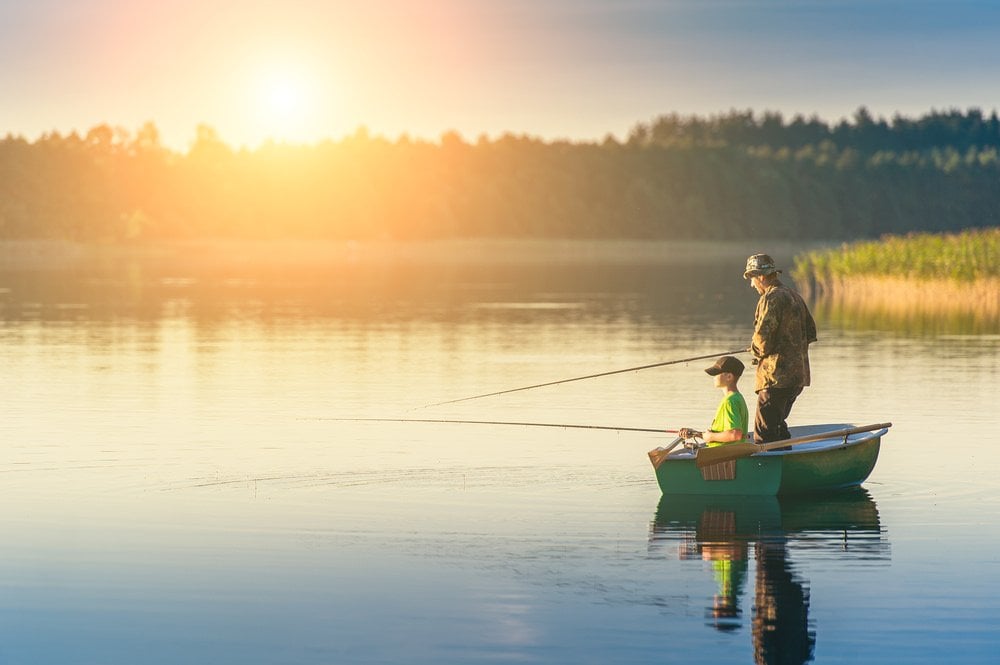 Are you familiar with the different types of fishing worms? Were you aware there was more than one? When I started fishing, I regularly took nightcrawlers I caught and took them fishing. If you told me there were other types of worms out there, I would have laughed at you. After all, I was an expert. I stayed up late to catch them after rainstorms. No one knew more about worms than I did. Until I found out they did.

Imagine heading up to your favorite lake, picking up a dozen worms, launching the boat, getting all set up, and then reaching for the bait. You remove the lid and find the worms look different. You’ve always bought nightcrawlers. The trout here love nightcrawlers. The worms in the container are most definitely not nightcrawlers. They’re smaller, thinner, and red. What abomination have you brought to the lake?

Well, that’s a great question. There are several types of fishing worms to choose from. Nightcrawlers might top the list for most, though there are others that can really bring the trout in like crazy. The above example is of the red wiggler. While it might not be a commonly known worm, it’s an exceptionally good option for trout and panfish.

Fishing with worms has been taking place since humans figured out how to put bait on hooks. I’m pretty sure I’ve heard of birds using bait to catch fish, but I don’t know if they use worms or not. I’ve been fishing with worms since I was a little kid and fishing with all sorts of baits and tackle for my entire adult life. I’ve caught everything from Arctic Grayling on flies to Mako sharks while reeling in Amberjacks. I didn’t want to catch Makos. It just happened.

Without further delay, let’s take a look at the different types of fishing worms:

As an angler, you’ve been in a store that sells bait before. If you haven’t, that’s fine, too. It’s time that you make that leap. Here’s what to do. The bait fridge has a row or two of worm containers. There are usually several containers of nightcrawlers or earthworms, then the mealworms, waxworms, red wigglers, and maybe even leeches. Some shops only have one or two types, while others have so many, it’s easy to get lost in the options.

With the upsurge in angling, there’s also been an increase in bait competition. Now you can find genetically modified worms that are “guaranteed” to live for 30 days and will give off a scent when submerged. You have the option of garlic, anise, earthworm (really? A scent to make an earthworm smell like itself?), and corn. I’ve used the garlic scent before on a lake that garlic powerbait does exceptionally well and found no increase in production. It could have been my approach. It could have been that the fish didn’t want to eat a green, glowing, garlic-scented worm. I’m not sure.

See also  Can Fishing Reels Get Wet? Will that Damage or Impede Reel Performance?

Be sure to open the container and use the little stick the store offers in the fridge to ensure the worms are lively. If you get to the lake before checking your worms, you’ll be very disappointed when you open them and find a container full of mush. Believe me, that’s a stink you don’t soon forget. An active container is going to be obvious. The worms will be moving around, actively trying to get away from the stir stick. That’s what you want.

Waxworms and mealworms are different. They should be moving around and not be mushy. If they’re mushy, they’ve gone bad. Red wigglers are the same as nightcrawlers. Be sure they’re active. Leeches are a different beast. You could stick your hand in the bottle and see if they attach to you, but that would be horrible. Just make sure they’re alive and well.

Once you’re at the water, it’s time to rig these guys up. A nightcrawler is typically 4-6” long, meaning you need to cut it in half. I use my thumbnail, but a more discerning angler might use a knife. Take the smaller piece and thread the hook through the cut end, sliding the worm up the hook shank. Once it’s up the entire shank, you can pop the tip through the body of the worm and let the remainder dangle freely.

Another way is to slide the hook through the center of the worm, fold it over, slide the tip through it again so it is secure, and cast it out. That gives the worm a more lifelike movement in the water.

Leeches can be rigged much the same way. Mealworms and waxworms work best on treble hooks due to their smaller size. 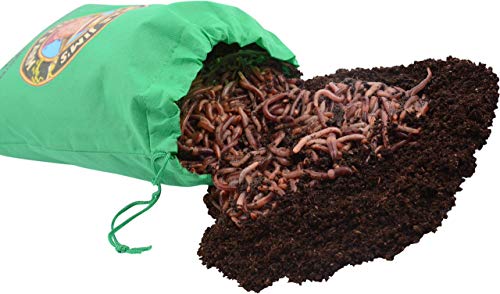 Nightcrawlers are synonymous with fishing. When you picture an angler fishing with a worm, you’re typically going to picture a nightcrawler. There’s a good reason for that. Nightcrawlers have a long history of catching fish., plus, they are easy to find and big enough to get on the hook without a problem.

These feisty worms are the go-to bait for most anglers because of their size, ability to cause a commotion on the surface, and durability. Let’s say you’re targeting yellow perch. Since we all know yellow perch will bite on the smallest of baits, one nightcrawler will catch half a bucket full. That’s because you can cut them into tiny pieces, and each piece might catch two or three perch before one finally gets away with it.

See also  What are Fishing Waders? When Do You Use Them?

Bigger fish will want a bigger piece of worm. If you’re after big bass, use a whole nightcrawler and toss it on the surface. Once hooked, nightcrawlers tend to freak out a bit and will wiggle and twist all over, causing a big commotion on the surface. Fish from all over the area will come to take a closer look, hoping there’s a fat nightcrawler to eat.

There are several ways to fish with a nightcrawler, from letting it sink under its own weight while the line has a bobber a few feet up the line to indicate a bite to using a worm injector that literally inflates the worm with air to make it float so you can have it rise up off the bottom of the lake. I like to use a water bubble that slowly sinks through the water column and takes the bait with it. That allows me to find the depth the fish are holding at if I am on the shore without electronics. 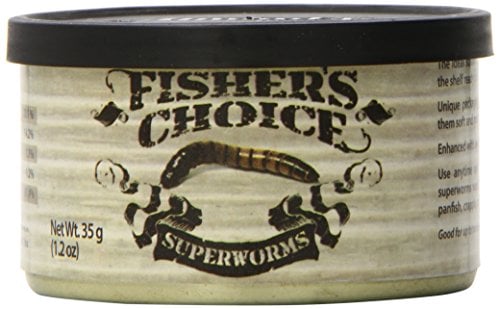 Mealworms are great for catching anything small. Trout, panfish like bluegill and crappie, and perch all love mealworms. I like to use them when yellow perch. They let out a bit of scent under the water as they break apart a little, drawing in curious diners. They work year-round for all types of smaller fish, and I’ve done very well catching white bass with them in the past.

Mealworms are technically larvae of a type of beetle. That’s why they are weird-looking and feel completely different when attached to a hook. Go ahead and give them a sniff. They smell awful. Apparently, fish like them quite a bit, so who am I to judge. I like to rig them up on treble hooks, so they stay hooked up. I tend to lose them on bait hooks. 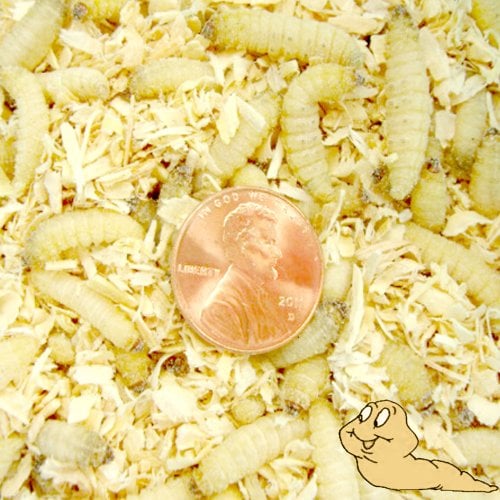 Waxworms fall into the same category as mealworms. They aren’t worms, but fish love them anyway. I use these the most during ice fishing. Waxworms are one of the most readily available baits for ice anglers, and for a good reason. Fish love them, and they catch well during the cold months. Small bait hooks work well, just feed the hook through the body and up the shank.

Waxworms come in a smaller container that’s filled with sawdust. Don’t dump that out. It keeps them warm. If you dump out the sawdust, the waxworms will freeze solid in no time, and you’ll have a hard time fishing with them. Fish love them because they’re like little fatty bonbons served up at the bottom of the lake. 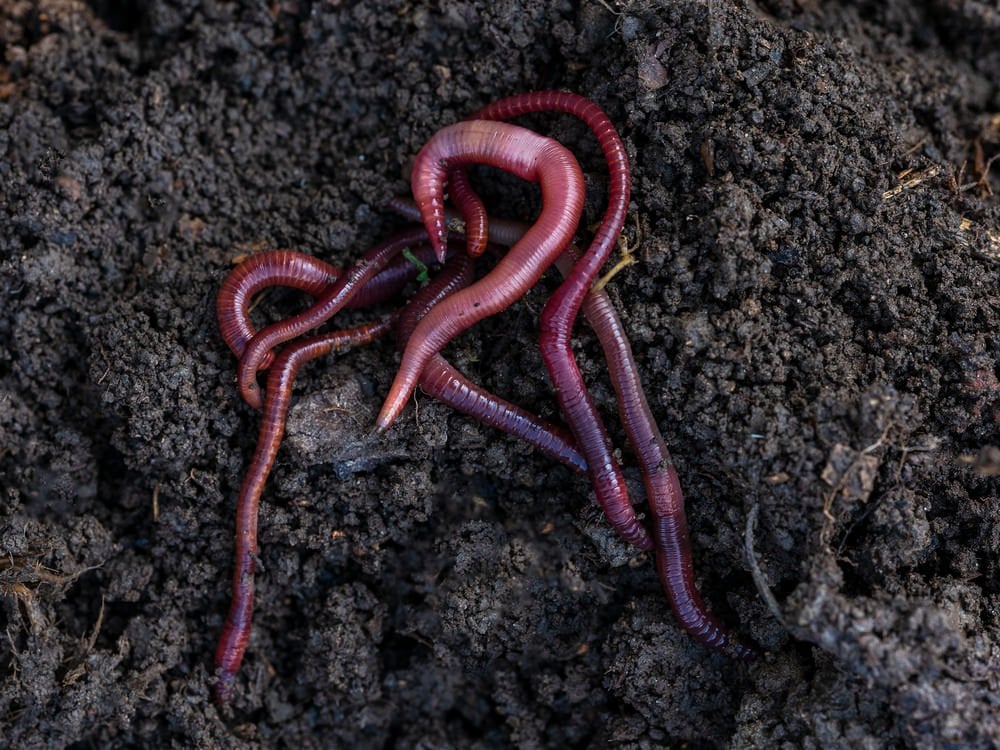 Red wigglers are a great worm for targeting trout and other smaller species. They live up to their name, as you’ll see when you open a container of them. They’re bright red and wiggle like crazy. The container is going to be filled with a variety of sizes. They come in large, medium, and small, all mixed together. Typically, the smaller ones will be the most abundant in the package, with a few medium and large, but you never know.

Big red wigglers are typically smaller than a medium-sized nightcrawler, so they aren’t meant for targeting big fish. They are perfect for smaller game, though. If you’re having an issue finding them at your local bait shop, check with your local garden center. These wiggly fellows are popular composting worms, so the garden centers should have them. 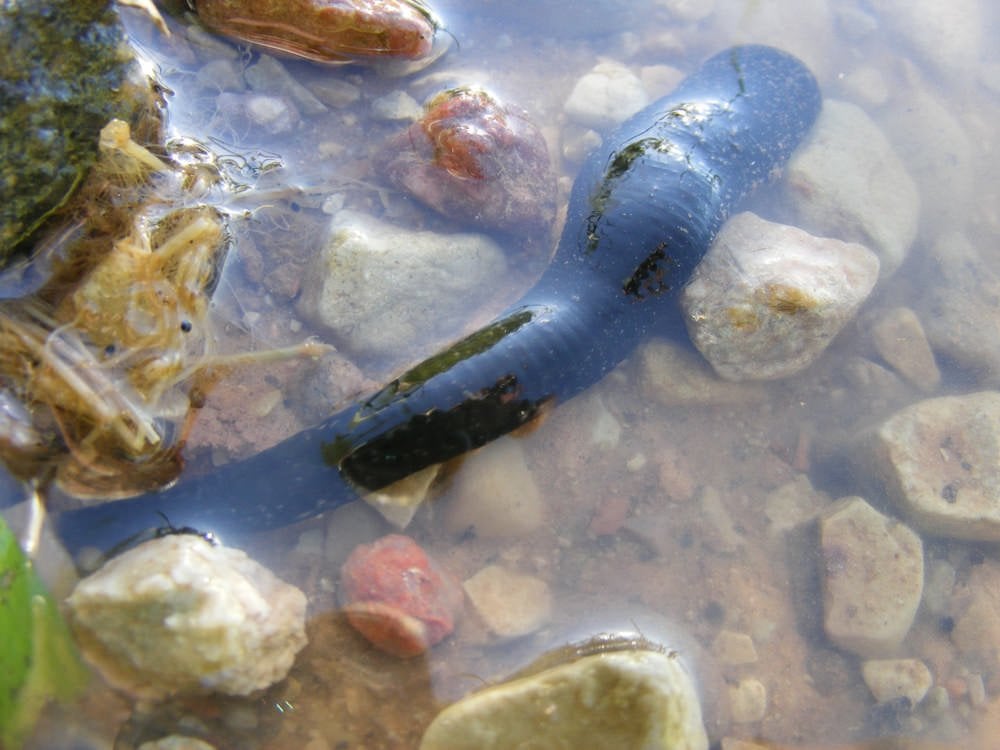 Leeches can be an incredibly productive bait. Just keep your fingers and hands away from their mouths. I was fishing at a lake that had a small leech population and was not faring well at all with any of the usual techniques. Frustration was setting in, and I kicked a rock along the shoreline. A large leech was hanging off the side of the rock, so I thought, “Why not?”

I put the leech on my hook, cast out, reeled in a few times, and suddenly it was fish on. It felt like a truck hit my line. I was set up with an 8lb test targeting smallmouth bass. Whatever it was on the other end of my line was most definitely not a smallmouth. Line started peeling off my reel, and after three or four minutes of me losing the battle, I saw a huge, dark shape in the water. I swear it was at least three feet long. It did a roll and was gone. I spent the next 20 minutes searching for another leech, but no luck. I’ve gone back since with leeches and done very well but never caught anything close to whatever that was. I’m pretty sure it was a giant catfish.

With that said, leeches are fun. They’ll also suck your blood if you’re not careful. I call it a risk worth taking. 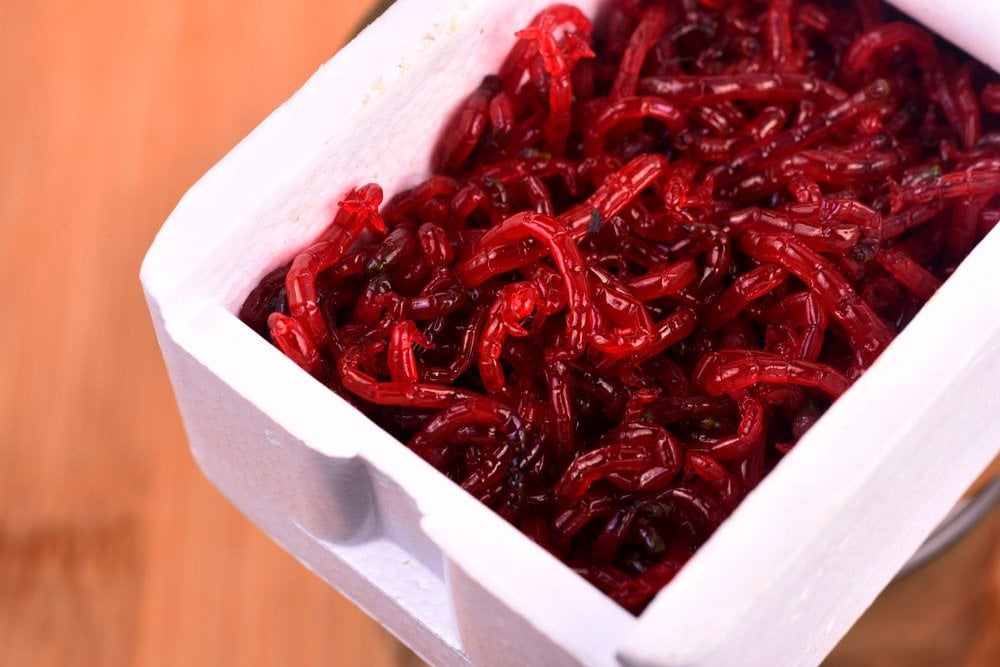 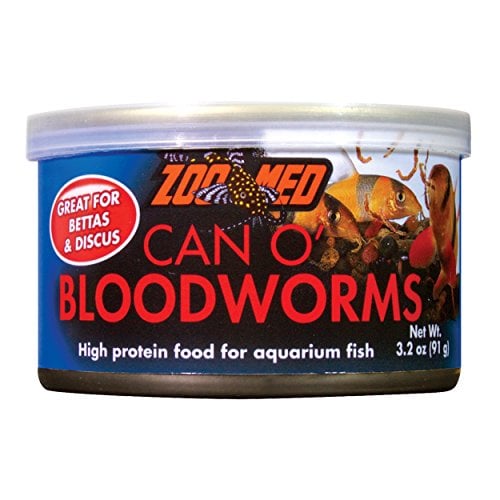 If you read the leech section and thought to yourself, “Nope, not for me.” Then go ahead and skip this one. Bloodworms are amazing little critters that will catch all sorts of fish in saltwater. I’ve used them to catch croaker and sea trout. Striped bass love them. Chuck some out to surf perch, and you’d think they were starving.

Bloodworms are available in a huge range of sizes. You’ll occasionally find smaller ones, generally find pretty big ones, and sometimes come across absolute monsters. The wide range of worm sizes means you can target a huge range of fish with them. Fish love them because they are juicy, tasty, and full of fat. Chase down some flounder and present a bloodworm anywhere near them. You’ll have plenty of flounder to eat. There’s only one drawback to bloodworms.

Bloodworms like to bite back. They have teeth. When you’re putting them on the hook, they might just try to take a little nibble out of you.

Is there a market good market for selling mealworms to fisherman ??