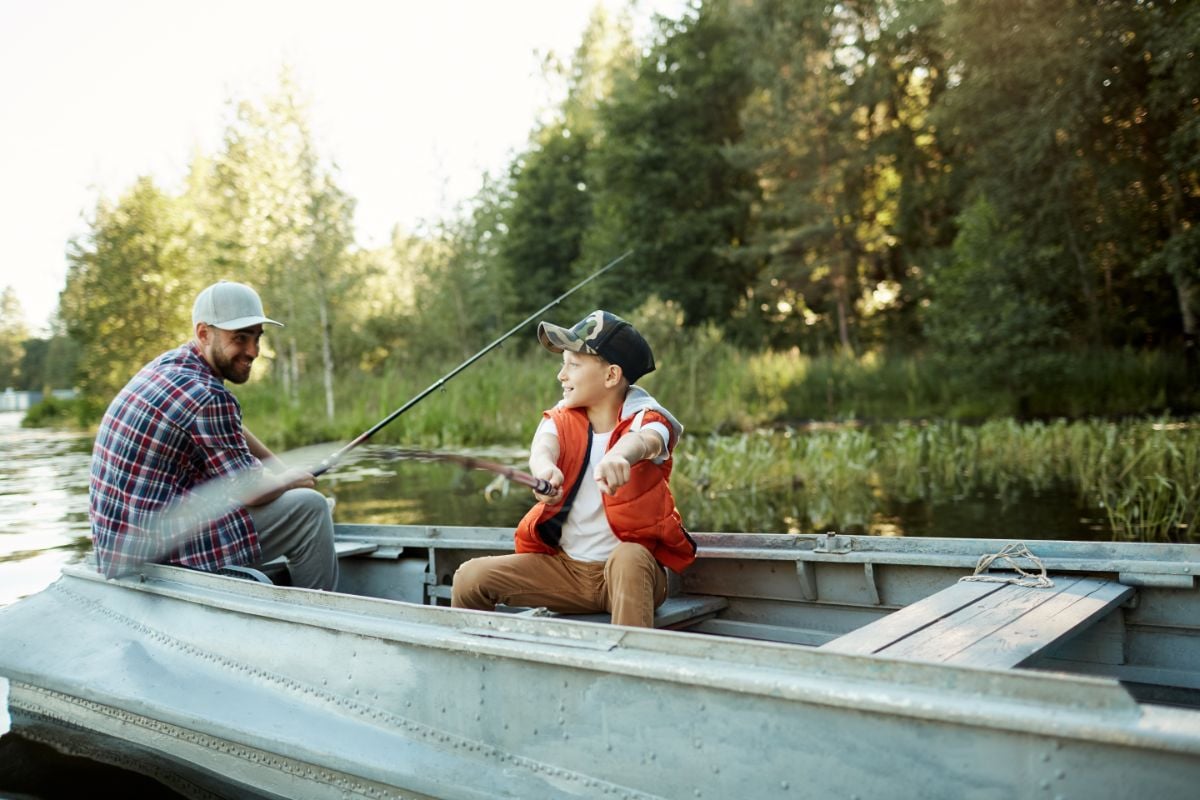 I remember a few years back when I went angling with my friend, and he told me to keep quiet to avoid scaring the fish away. Since then, I have kept asking myself the truth behind fishing and noise. This is one of the most crucial questions that most people ask themselves when fishing.

But over the years, I have gained substantial fishing experience, which helped me understand that it is a yes and no situation. To understand this concept, I will explain how sounds and vibrations are transmitted in and above the water surface. Continue reading this post to familiarize yourself with the truth behind fishing and noises above and in the water.

Can Talking Scare Away the Fish?

The truth is that sounds above the water cannot be transmitted in the water. I experienced this while swimming at the beach. Once I got beneath the water surface, I could not hear any sound, yet the beach was filled with laughter, noises, and screams.

Sound cannot be transmitted from the air to water due to the difference in density. This difference acts as a barrier that causes the sounds to bounce back rather than being transmitted in the water. In this regard, fish underwater cannot hear talking and loud noises.

Can Music Scare Away the Fish? 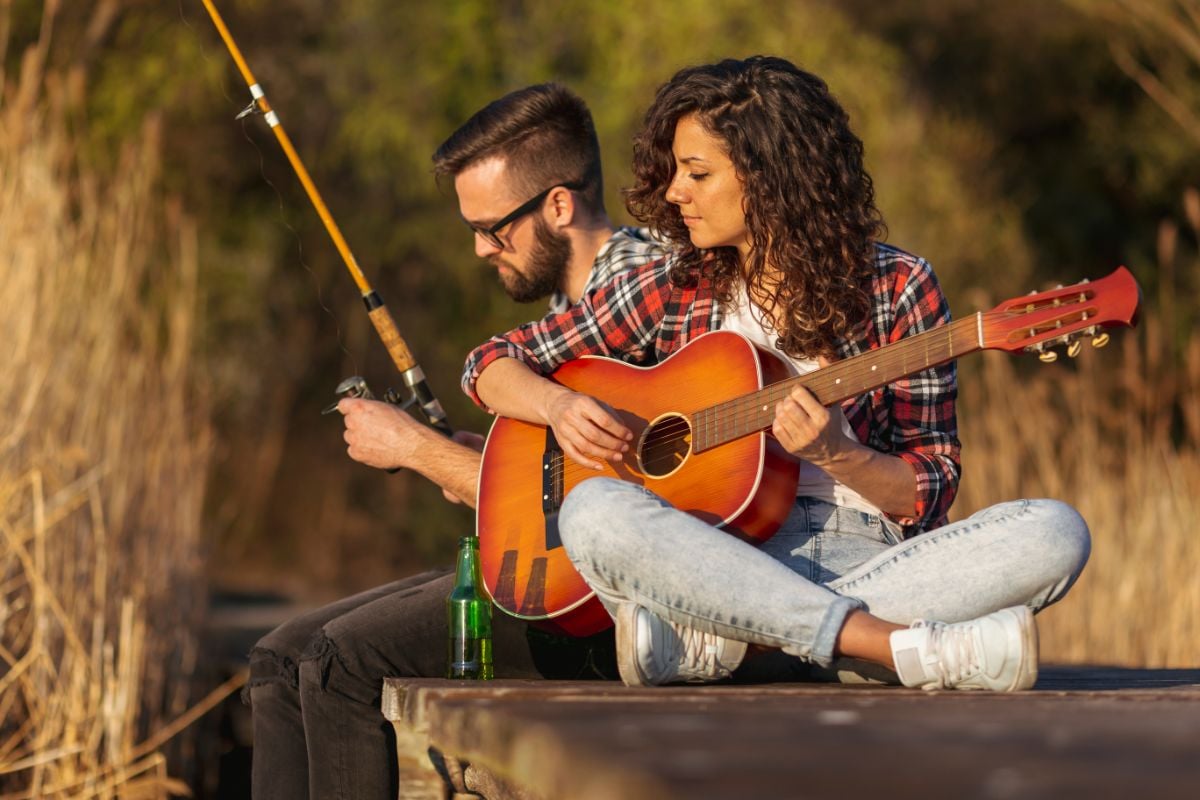 Furthermore, some fish get attracted to music as long as it is not too loud. There was a time I was angling and noted that some music would attract fish while other music genres would repel them. Another interesting fact is that music can tweak various fish behaviors such as eating and swimming patterns.

What Scares Away the Fish 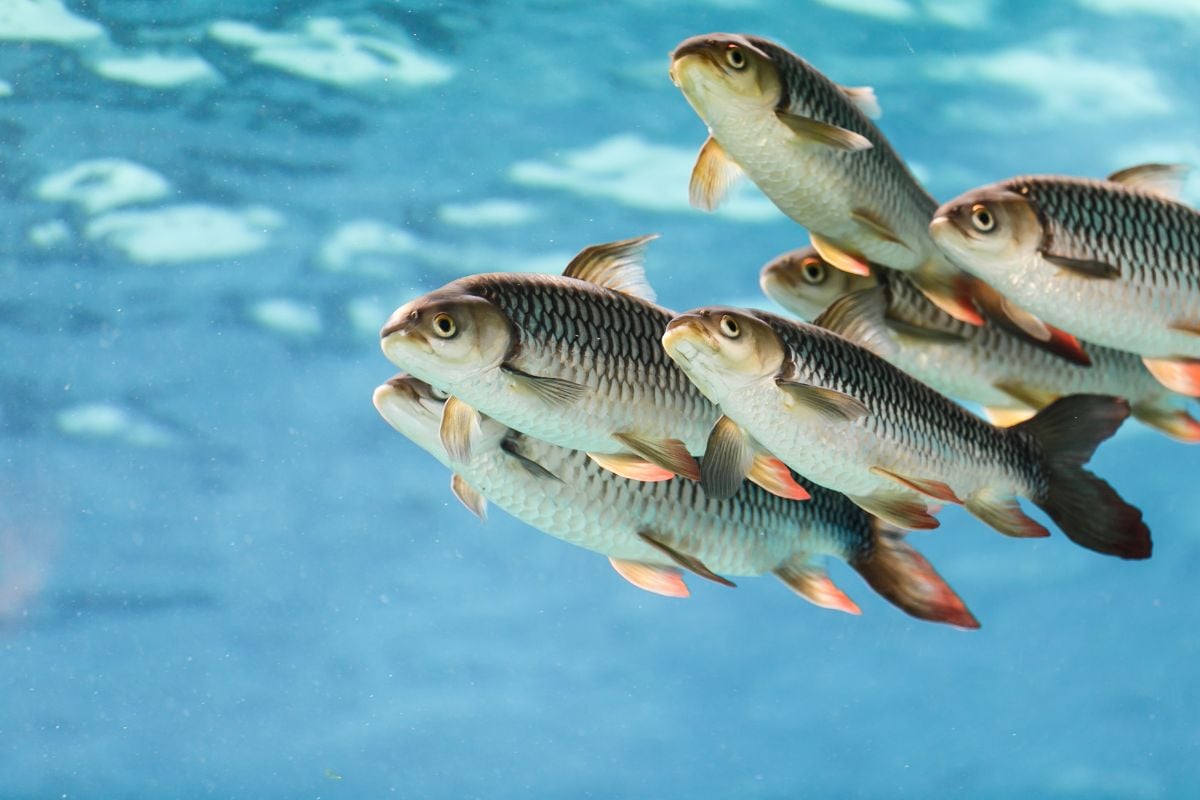 Fish can only be scared away by noises that transmit vibration in the water. For instance, dropping pliers in the boat, running a boat motor, or jumping up and down in the boat. This is because fish uses sensory organs that are very sensitive to pressure and vibrations. The fish’s swimming bladder also helps in sensing sound vibrations.

Smaller fish tend to be scared more than the bigger ones. This is because fish also feel the vibrations and pressure via their skins. The smaller ones have tender skin which makes them perceive these vibrations faster and more frequently. Therefore, the smaller one will run away even by the slightest impact on vibration or pressure.

Extremely large vibrations will scare away even the bigger fish. They tend to think that there is a larger predator, which makes them run for cover. Another factor that scares away fish is large shadows.

This has been attributed to the fact that large birds, foxes, bears, and raccoons, are the major predators of fish. So, any time a fish sees a moving shadow, they normally run away for cover.

Do I Have to Be Quiet When Fishing? 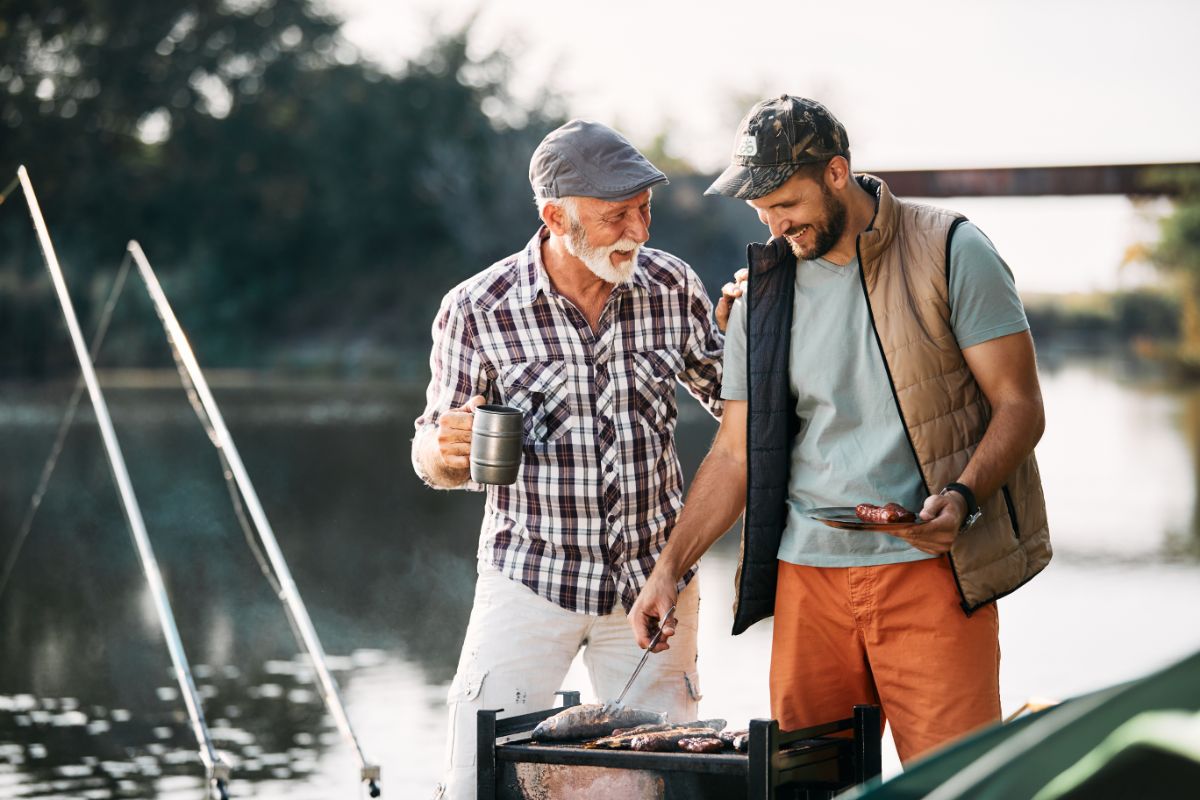 Although noises cannot scare away the fish, there is a good reason to always be quiet while angling. There are several factors that can determine whether being quiet is compulsory while fishing. For example, there are some types of fish that are highly affected by noise.

See also  To Choose Stretchy or Non-stretcy Fishing Line? That is the Question

I also noticed that fishing in the shallows with no wind requires one to be quieter than in other fishing areas. However, this does not mean that one should be extremely quiet. Such environments require one to speak at normal levels and move around responsibly.

The problem comes when one drops something on the boat’s floor or makes any unusual noises. But fishing in deep water cannot be affected much by noise.

Can Disturbing the Water Affect Fishing?

As seen above, sounds above the water cannot affect fishing activities. But when one breaks the water surface, the fish will definitely react to the sounds. The reason why fish react promptly to vibrations is that sounds travel five times faster than in air. Therefore, such noises and vibrations are extreme to fish in water, which scares them away.

What Determines the Impact of Noise on Fish?

The following factors determine the effect of the noise on the fish.

Some researchers have indicated that fish can distinguish different types of sound and music. Although it is not clear whether different sounds and music impact the fish’s behavior, it has been confirmed that fish react differently to sounds.

Low-frequency sounds tend to travel faster and travel for longer. Fish identify such sounds promptly and take cover for their safety. Loud noises travel faster in water than above the water surface.

For example, if one drops something on the boat’s surface, this will highly scare the fish. Fish can change their behaviors, such as feeding and swimming patterns. But after a while, they tend to forget and get back to their normal life even if the sounds are still present.

As stated earlier, small fish react promptly to loud noises and vibrations, while larger ones are more tolerant. This is because their skin is one of their sensory organs. The smaller fish will escape due to the pressure of loud noises, while the larger ones escape if they feel that the noise is a potential threat.

Larger fish may ignore the sounds if they feel that it is not a major threat. In addition, larger fish have more pronounced hearing systems compared to smaller ones. 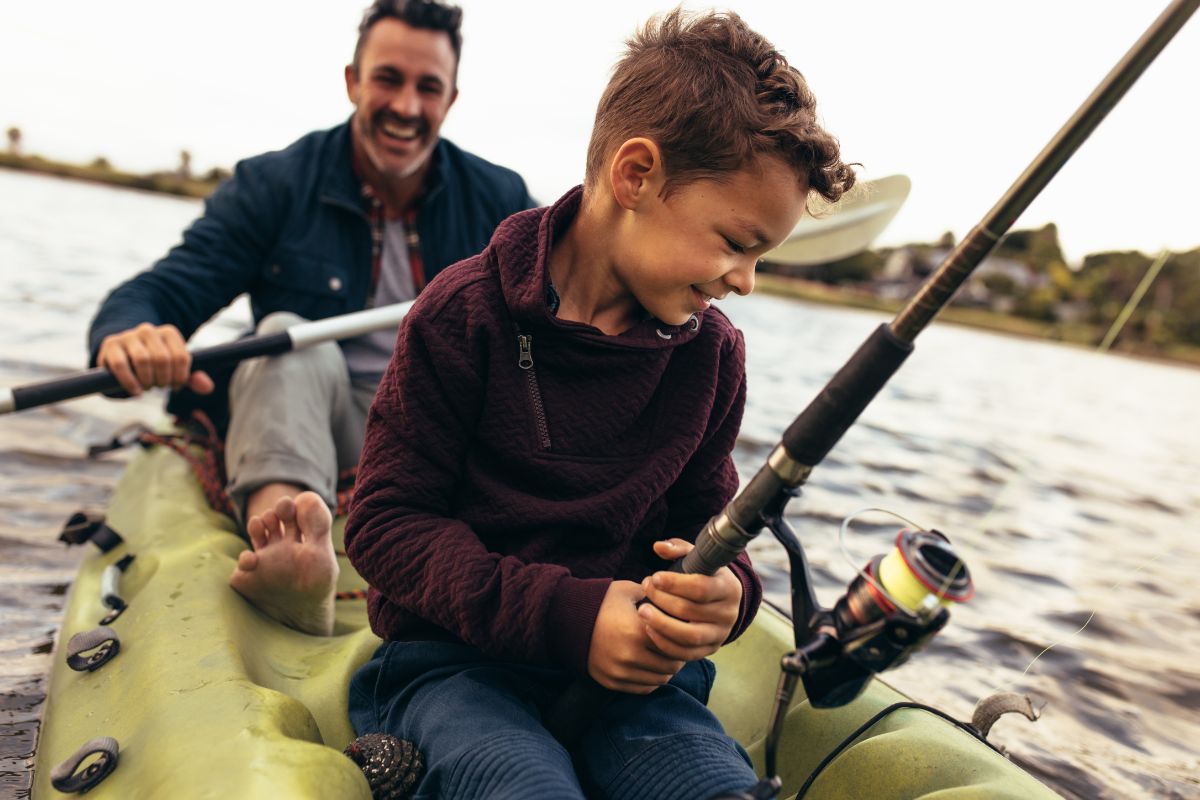 The kind of bother that affects fish most, among other marine life, is water pollution. It causes negative effects on the fish’s health and may distort their reproductive abilities. But there is another overlooked type of pollution — noise pollution.

The sounds of boat motors, and other noise sources, have numerous negative effects on the fish underwater. When fish are exposed to constant noise pollution, they can have complications such as loss of hearing, increased stress levels, and numerous changes in behaviors.

In addition, noise is detrimental to the fish’s immune system. Some scientists have indicated that noise pollution can cause low immunity to disease resistance. Fish are not the only marine life affected by noise pollution.

A study on Environmental Evidence shows that other aquatic animals such as arthropods, amphibians, and reptiles, among others, can also face the consequences of noise pollution.

People always wonder whether it is a myth or a fact for fish to be scared away by noise. But the truth is that noises above the water cannot scare the fish. The problem arises when one breaks the water surface, which sends the vibrations into the water.

The difference in density between water and air and the fact that underwater environments are noisy makes it difficult for fish to hear noises above the water. However, it is always recommended to maintain a good level of talking and noise while fishing because different types of fish respond differently to noise.