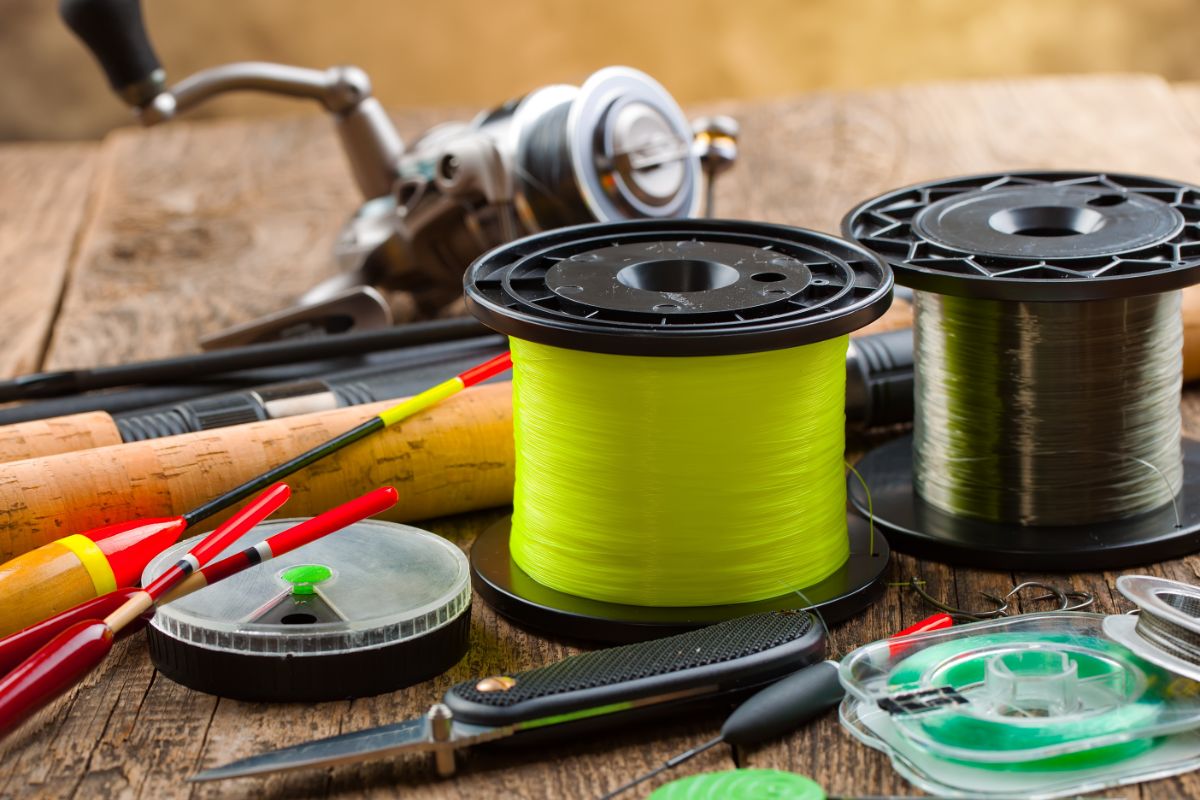 Fishing writing and Bass Fishing Hall of Fame member Homer Circle was saltwater fishing many years ago with some friends. Unknown to everyone else, Uncle Homer (his nickname) talked with a  fishing line maker before the trip.

He got a spool of uncured monofilament and spooled one of the reels with it. One of the guys in the fishing party hooked a decent rooster tail. The saltwater rooster tail is a beautiful fish with high dorsal fins. They pull hard and are a premium catch on any fishing trip.

Uncured mono stretches a lot. Uncle Homer said his fishing buddy used some colorful language as he watched the line stretch and the big rooster tail head for the next time zone.

Even in cured mono, that stretch is a major difference between monofilament and braided lines. Both lines are measured in terms of strength or pound test. For instance, 12-pound test in either line has a rated breaking strength of around 12 pounds. Depending on the company, that actual breaking weight can be slightly lower or higher.

Contents show
What is a Monofilament
What is Braid?
Features
Mono
Fluorocarbon
Braid
Cost
Brief History
Which is Best?

What is a Monofilament

Monofilament fishing line, often called mono for short, is a single strand of specialized plastic. For decades it is the top choice for anglers around the world. It comes in colors. Some lines come in multiple colors.

Braided line is multiple strands woven together. Today’s braids are usually made from polyethylene fibers or so-called “super braid” fibers like Kevlar.

The advantage to super braids over traditional lines is size. A super braid line at 12-pound test is several times smaller in diameter than regular braided line. Both can be colored. 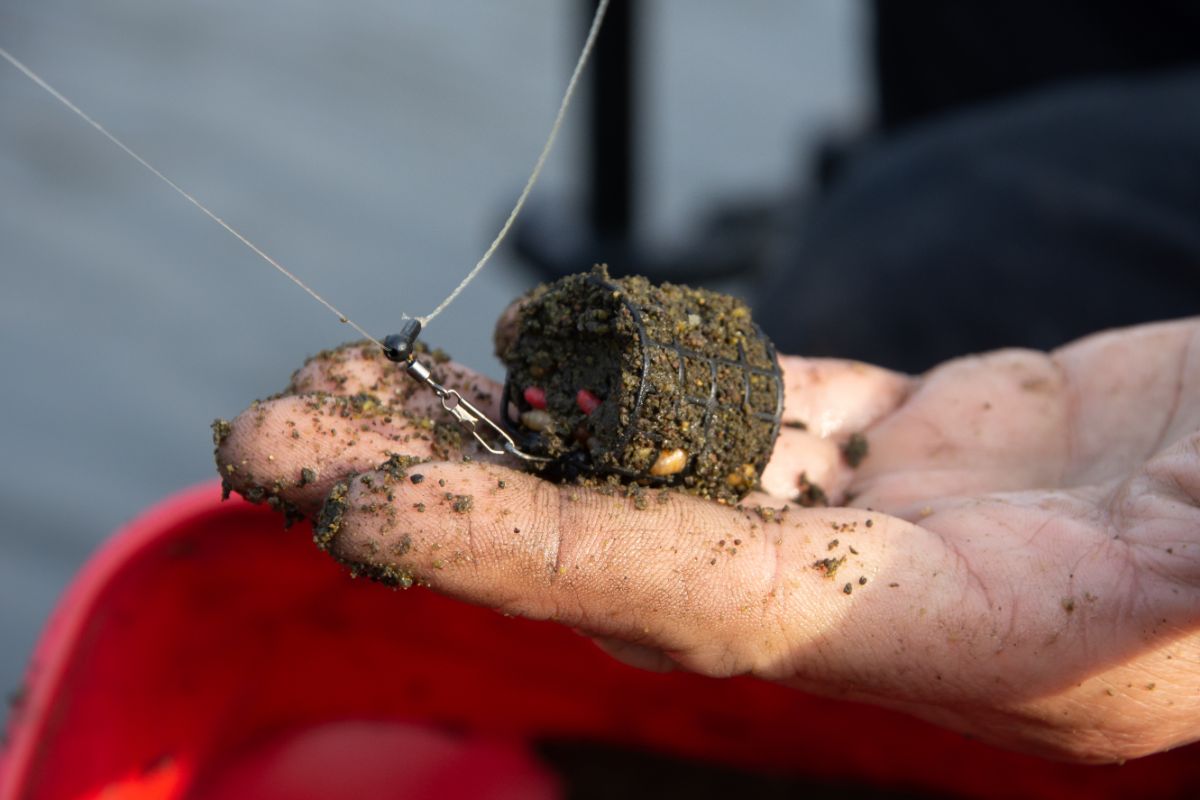 Monofilament fishing line is made by many different manufacturers. It comes in pound tests from 2-pound to as much as 200-pound test. The heaviest lines are used as leaders for lighter fishing lines.

See also  What are Fishing Magnets and How Do They Work?

An issue with mono is it conducts light and stays visible in the water column. Fish can see the line. Coloring the line, either at the factory or later when the line is spooled, breaks up the light transmission. You can take a permanent marker and draw horizontal lines across the line on the spool or your reel to achieve the light-breaking effect.

Mono also stretches, although not as much as in the joke Homer Circle played on his friend. It also absorbs water. Ultraviolet light causes it to break down, which means regular anglers change their line frequently. When kept in the dark, it can last for many years.

You have to be exact when tying knots with mono lines. The line will cut itself. 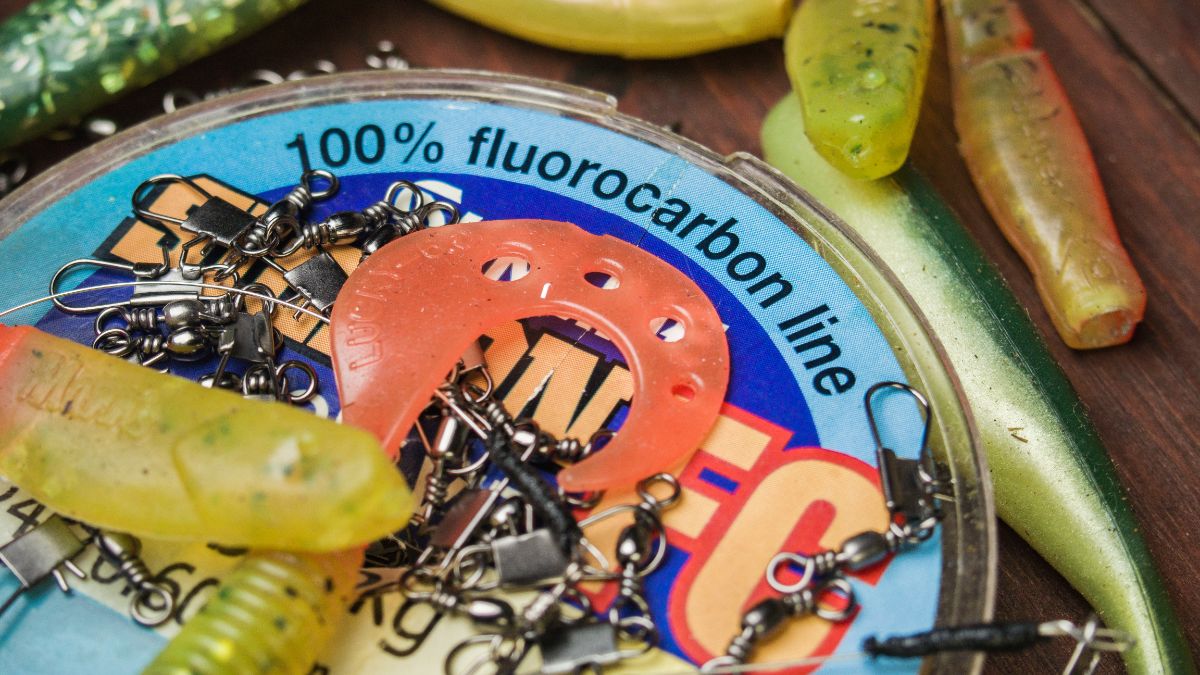 Fluorocarbon’s chief advantage is that it almost disappears in the water. When fluoro came out, it was as big a revolution in fishing as the superbraids. Leader shy fish, which saw the traditional mono line and refused to bite, could not see the new line.

Fluorocarbon does not break down in sunlight and absorbs less water than mono. Fluorocarbon is also used as leader material exactly like mono. It has some stretch.

Just like regular mono, fluorocarbon line can cut itself. You must use the right knots to avoid this. 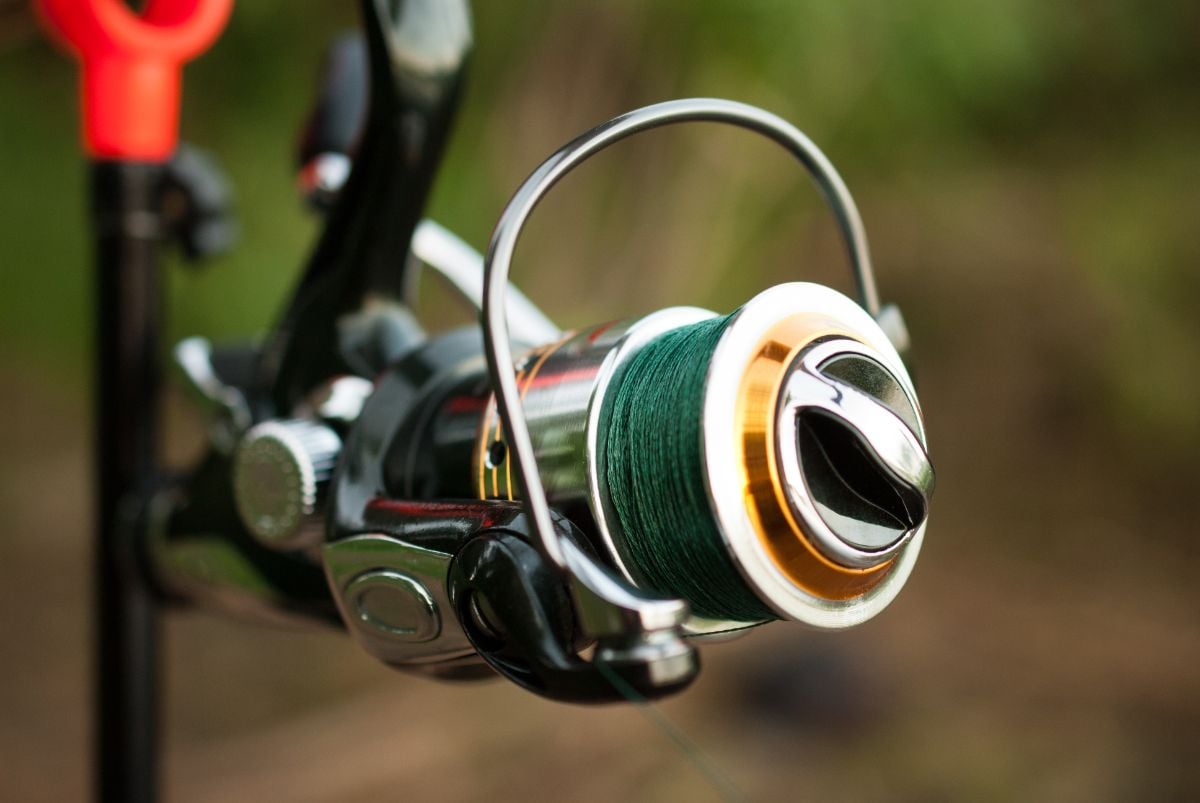 See also  Do You Need a Sinker for Fishing? If So, When and Why?

At the same time, it has distinct disadvantages over mono.

That lack of stretch puts more work on the angler. In short-cast fishing this is not much to worry about. However, things change when you start fishing offshore, where fathoms are a unit of measurement. As lifelong Florida angler Reggie Roddenberry says, braided line lets you feel every twitch of the fish. You have to fight every pull of that fish. Mono, which stretches, makes the fish fight the line and you.

Braid can also have a wire core, which is handy when you are going after fish with sharp teeth that can slice a fishing line.

The superbraids brought a new level of fishing. When they first came out, typical weights were more than 50-pound test with a 15-10-pound monofilament diameter.

Braided line comes in a wide variety of colors. It can even be multi-colored, with each strand being a different color. Braids can also be marked with a permanent marker, although this may not be permanent in some braids.

Braided line does not break down in sunlight. It is much harder to recycle than monofilaments.

Braid, being thinner than mono, sinks faster. This is an advantage when bottom fishing. Braids are also more abrasion resistant than mono.

Braids do not absorb water, but water will seep between the fibers. In below-zero fishing conditions, the water can freeze, turning the line into a stick. Some line makers have coated braids specifically to avoid this problem.

Braid will not cut itself, but it also does not lend itself well to knots. Some anglers keep a tube of Super Glue on hand. A drop on the knot makes sure it will not come undone when fighting a fish. 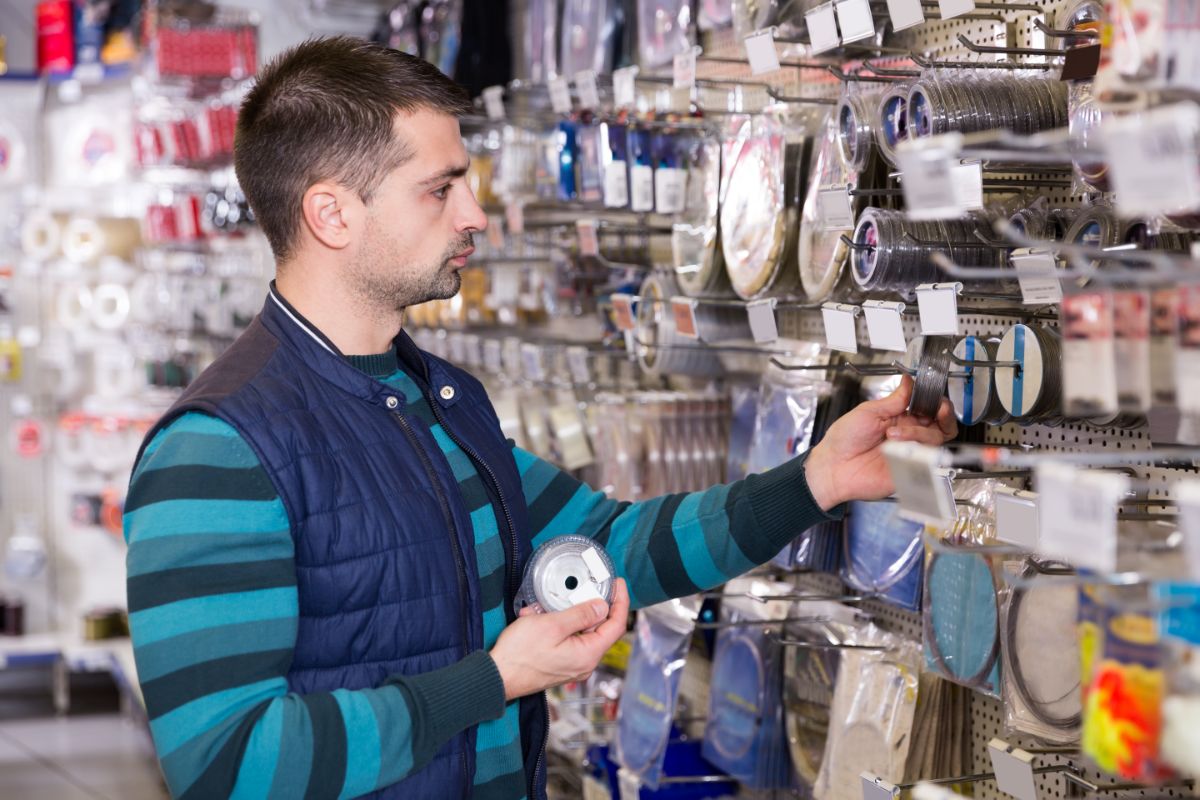 Traditional monofilament is the cheapest fishing line you can buy.

Fluorocarbon is the middle choice in terms of price.

Braids are the most expensive of the three lines.

As with most things in life, the more line you buy on a spool at the time, the cheaper it is per foot.

Mono came out in the 1950s. It was made from nylon and created a revolution in fishing.

The first fluorocarbon line came out in 1971. Since one company made it, it was slow to catch on. When more companies started to make it around 2000, its popularity skyrocketed.

Super braids came out in the early 90s. The original was yellow Kevlar. Other line types soon followed. 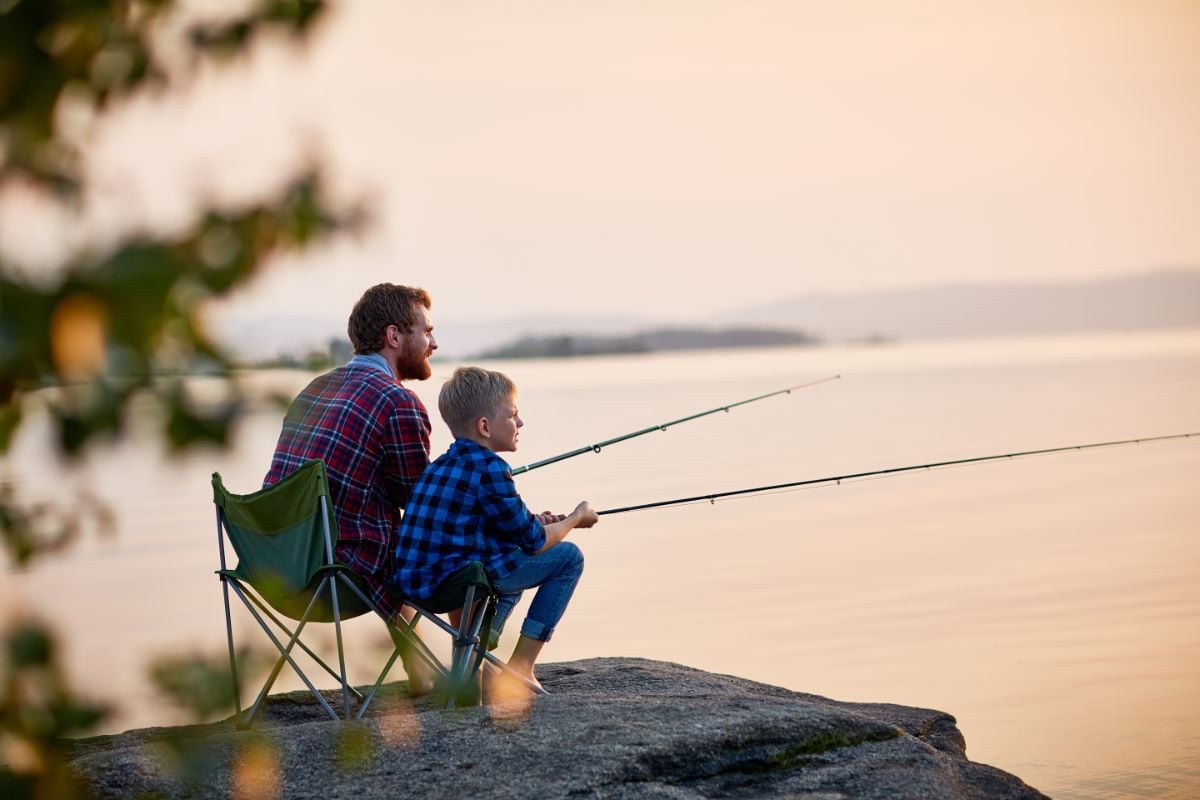 The best line is what you are most comfortable with. Most of my freshwater reels are spooled with fluorocarbon. All my topwater rods have monofilament. I need that stretch when setting a hook.

My big reels are spooled with monofilament. Catfish, my main freshwater target for these big reels, do not have good eyesight so I do not need to hide the line. The mono is a lot cheaper when putting 300 yards of 30 to40-pound test on a reel. When I’m fishing offshore, I’m going to use heavy shock fluorocarbon leaders anyway.

I use a lot of fluorocarbon leaders in freshwater and saltwater. I use regular mono on cane poles.

I have 2 bass reels spooled with braid. These are my go-to rigs when fishing in heavy cover. I pull big lures with them.

Ultrawary cold water trout means using fluorocarbon tippets on my flyrod. If I am reel fishing, I still use a fluorocarbon leader.